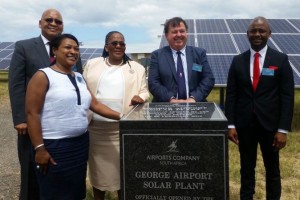 In the initial phase, the solar power project will provide around 40 per cent of the airport’s energy requirement. Once fully completed, it will make the airport totally self-sufficient in terms of energy.
The facility will harness solar power through photovoltaic panels, which have been installed at a cost of almost a million dollars.
The South African airports company hopes that George will pave the way for the solar energy project to be rolled out to the rest of the nine airports it manages.

In 2015, the international airport of Kochi, the port city in the Indian state of Kerala, became the first airport in the world to be powered entirely by solar energy. The airport management company invested around 9.5 million dollars in the project, which got underway in 2013.